The best cooperatives
Which are the best olive oils?
Where to buy?

Among all the brands we sell here, our star product is the oil from Cortijuelo San Benito, which is produced by us. Likewise, San Benito oil is the cooperative to which we belong. However, all these brands are committed to quality, care of the environment and the fixation of population in rural areas.

1. Oil mills and cooperatives in Jaén

Jaén is the Spanish province with the highest concentration of olive trees and the highest production of olive oil. For this reason this province is recognized as the “Capital of Olive Oil”. In addition, and as expected, the oil of Jaén is one of the most demanded in the world.

a) Olive groves of Jaén

Spain produces an average of 50% of all the world’s olive oil each year, and almost 50% of this is produced in Jaén.

b) Wealth of Jaén

Jaén is worth a visit, not only for its extraordinary gastronomy and monuments. It is impressive to see its landscapes, a landscape undulated and scratched by its olive groves.  Another of its riches are its mountains, Sierra Magina, Sierra Segura and Sierra de Cazorla, is the last where the most important river of Andalusia is born.

The most common variety cultivated in Jaén is the picual. However, many more varieties are cultivated here, such as arbequina, royal, picudo, hojiblanca and many more.

Finally, Jaén as a province that brings together the largest olive fields, also hosts the most important fairs of this sector each year, among them we can name: Expoliva and the International Congress on Olive Oil and Health (CIAS).

Jaén has a perfect climate for the olive tree. For this reason, this region has specialized in the production of olive oil.

A zone of Spain with dry and hard summers, together with cold and rainy winters. Achieving this climatology together with a limestone soil, some spectacular and unique extra virgin olive oils.

The predominant variety is the picual, although here we find a large number of varieties, such as arbequina, hojiblanca, royal, picudo and many more.

In this group, as there is a variety of so many oils, it will depend on the brand and the oil mill. As a general rule, the first to arrive from the new season are those from Castillo de Canena, Oro Bailen and Oro de Canava. The rest usually arrive at the end of December and in January.

In the province of Jaén there are hundreds of olive oil cooperatives. In El Cortijuelo de San Benito we have visited hundreds of them, in order to work with the best from the point of view of the quality of their olive oils, their seriousness and good service. Among the hundreds we have studied and visited, we have selected the following:

Other interesting cooperatives from Jaén that we have also selected:

In Jaén there are a hundred olive oil cooperatives. We have selected these, because we have had the opportunity to know well their presidents, cooperativistas and zones of production.

3. The best oil from Jaen

In order to offer our customers the best oil from Jaen, El Cortijuelo de San Benito has travelled hundreds of kilometres to visit and taste the best oils. Among the best brands and oils we have selected, these are as follows: 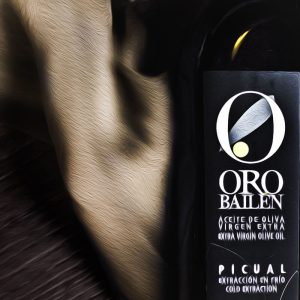 4. Oil sales on the internet

Internet sales are becoming more and more widespread. The vast majority of the Spanish and world population buys online.

Likewise, from El Cortijuelo de San Benito, a shop located in Las Rozas in Madrid, you can buy the best oil from Jaen on the internet. We send oils to the whole European Union and to many other countries all over the world.

Also, we bring from Jaén and also from other areas of Spain. Among the best known areas, we can name the following:

Finally, if you know other brands and you want us to add them, please contact us.

5. Denomination of origin of Jaén

After ten years working on this project, in a few months we will have the new Designation of Origin of oils from Jaen. This is very good news for the people of Jaen in defending their product and certifying the quality and unique conditions that Jaen has. Therefore, little by little we will see in the labels this Denomination, along with the others of Jaén; Sierra Magina. Sierra de Cazorla and Sierra Segura.

As in all products, if our priority is price, quality will always go hand in hand. If you are looking for cheap olive oils, it would be best to go to a grqan surface, they will offer you the best option.

Also, in our shop in Las Rozas de Madrid only quality oils are available. We always have a good quality price. However, we will never offer you the cheapest olive oil on the market.