Baena oil refers to the extra virgin olive oil that is produced in Baena and other nearby municipalities that are protected under this Denomination of Origin. One of our most demanded oils.

Where to find the best one?
Where can we buy it?
Opinions and Recommendations

In Baena oils, we have selected oil mills and cooperatives committed to the care of the environment and the quality of extra virgin olive oil. In addition, to give value and promote the rural development of these areas.

1. Denomination of Origin of Baena

The denomination of origin of Baena, includes about 60.000 hectares of olive grove of the province of Cordoba. between the municipalities that includes, we have Doñaa Mencía, Luque, Nueva Carteya, Zuheros, Castro del Río; Baena and Cabra.

Likewise, this Denomination was one of the first to be recognised both by the Spanish Government and by the European Union. It was founded in the 1980s.

b) Orography and climatology

This terrain stands out for its gentle undulations next to rough areas. This terrain also enjoys long, warm summers, along with mild, rainy winters. Therefore, a typical zone of the Mediterranean climate. 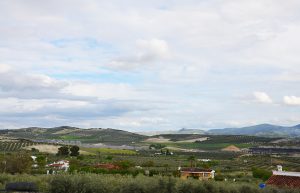 Its soil is mostly limestone, rich in calcium carbonate, as in most of Jaén. Therefore, a soil type very suitable for olive cultivation.

It was the Arabs, when they arrived in the Iberian Peninsula, who extended the cultivation of olive groves to this area. These villages are also rich in history. Here we find a large number of Iberian deposits and pre-Roman, Roman and Arab settlements.

The new harvest of Baena oils usually arrives at the end of November. First come the fresh oils which are sold in glass bottles. Later come those with a Designation of Origin and the filtered ones. The latter usually arrive at the end of December, but these dates vary every year.

If you want to be sure that the oil you are going to receive is from the new season, the best thing to do is to call or send us an email.

2. The best olive oil from Baena

Firstly, the Cortijuelo de San Benito with the aim of offering the best Baena olive oil, we have visited and studied all the cooperatives.  For this reason we have selected the cooperative of Germán Baena because it does not give a good service. Also, for the extraordinary quality of their extra virgin olive oils.

Video of DO Baena

Germán Baena’s cooperative is located in the same village of Baena and sells its olive oil with the following brands:

Finally, we recommend to all our clients that they try the fresh oils of the first campaign, an extra virgin olive oil that has neither been filtered nor decanted, which would be the purest and healthiest oil of all, freshly squeezed. Because these oils decant, these oils are only available from late November to late January.

In Baena we also have other cooperatives and oil mills that produce other extra quality olive oils, such as the following:

You will probably find other brands and miss them. Contact us, and we will study how to bring them.

3. Where to buy oil from Duque de Baena and Germán Baena?

You can also buy these extra virgin olive oils in our Las Rozas shop in Madrid and in our online shop. We can also send it to your home in Spain, the Canary Islands, the Balearic Islands as well as most of the countries of the European Union and other international countries if you wish.

Also, in our physical and online store we offer the following formats:

Therefore, those we have just mentioned are protected under the Denomination of Origin of Baena.

Without Denomination of Origin

They are also produced by the Germán Baena Cooperative but are not covered by this denomination because they are packed in plastic.

Plastic or PET in 5, 2, 1 and 0.5 liters: This is a Baena oil for a more familiar use and that comes out cheaper. The fresh oil at the beginning of the season is packed with the same brand and the same PET bottles.

In the first place, Baena oil is a well known oil both nationally and internationally. In our physical shop in Las Rozas de Madrid with online, is one of the most sold oils and that more positive opinions give our customers.

Also, this oil stands out for its great fruitiness and smoothness, a very versatile oil that we can use for crude, cooking and desserts and make mayonnaise, although the most suitable for desserts and mayonnaise is the Empeltre de Aragón variety. An oil that is not going to give a powerful flavour to dishes.

Finally, this olive oil is one of the first we bring when the first harvest comes. An oil that is worth taking, especially when it is so fresh. We call this oil from the new harvest, which has not been filtered or decanted, fresh olive oil.

Baena oil is available in amazon, carrefour, El Corteingles and other large surfaces. However, I recommend buying these Baena oils in specialty stores. In these shops they inform and advise you. More when we arrive at the end of season, because the big surfaces throw the prices to remove all the old oil.

However, in a specialized store they give you advice and in the case of the new campaign, they warn you.

Finally, if you want more information and recommendations about Baena oil or other regions, do not have any problem calling or writing us. We are happy to help you.

Denomination of origen of Baena